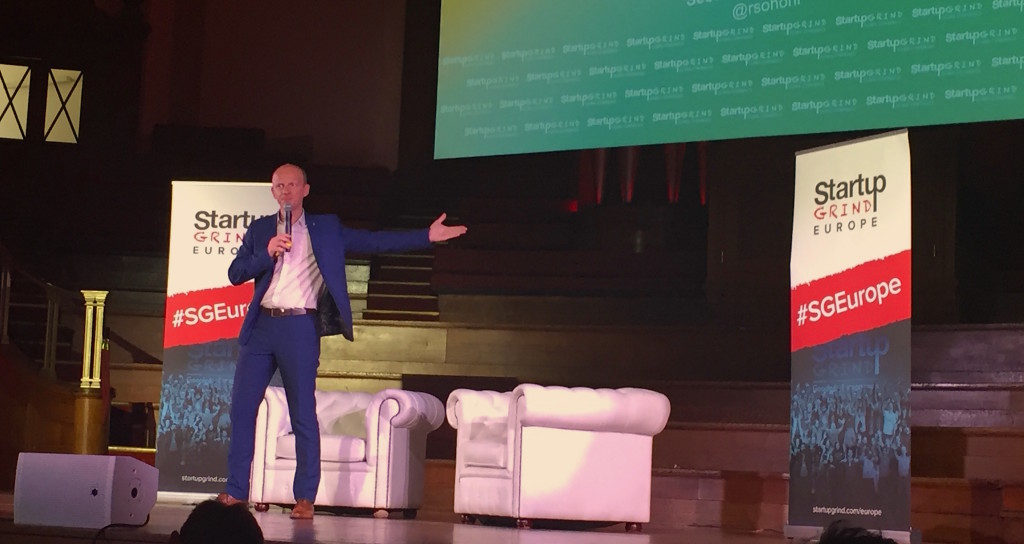 On the 15th of June more than 1000 people came to the historic building of Central Hall Westminster in London to celebrate the first Startup Grind Conference organized in Europe. As we all know them, startup conferences usually offer recognized founders and investors speaking on stage, while people in the audience never really get the chance to meet and mingle with them. Having been to many startup conferences, Startup Grind Europe was the first conference where I was allowed to approach any of the speakers and exchange ideas or receive valuable feedback. Being able to speak with the CEO of 500 Startups or the Co-Founder of Deliveroo was truly inspiring and insightful for me and definitely for other entrepreneurs participating in the event as well. It was before the conference was coming to an end when I realized that it was not a coincidence to be able to speak with so many accomplished entrepreneurs, but rather a well thought-out plan underpinned by the goal of Startup Grind – to connect entrepreneurs and foster global cooperation among them.

It felt great to realize that the man who was the main organizer of the conference is Slovak born.

Below is an interview with Marian Gazdik, the man behind Startup Grind Europe, enriched by the pictures from the event.

Marian, as the main organizer of Startup Grind Europe, can you tell us a bit more about the idea of the conference? How did you manage to bring that many great speakers and gather 1000 people under one roof?

We don´t only want to help the local communities but also want to encourage people to help each other. That´s why we need to bring communities together on a regular basis, organizing events every single month in every single country we are based in. Last year, it was over 1,200 events globally. On top of that, for the last four years, we have also been organizing an annual conference in Silicon Valley.

I came to help Startup Grind scale globally. Today, we inspire entrepreneurs in places like Ulaanbaatar in Mongolia or Dar es Salaam in Tanzania – places where people normally don’t have advanced entrepreneurship knowledge, but it can really help them to improve their lives.

The conference is one of the ways of bringing our mission to the world, because big speakers attract big crowds, and people listen to them more carefully. Since I´m in charge of the European region, where we cover 50 cities in over 25 countries, we wanted to bring our conference to Europe. We even named the conference Startup Grind Europe instead of Startup Grind London. We have our local teams from the whole region coming together.

You are now the Managing Director of Startup Grind (SUG) in Europe, overseeing all the SUG chapters led by the European directors and covering the area of London with SUG events on top of that. Can you tell us about your journey that led to this position?

I used to be a corporate employee doing marketing for Orange in Slovakia and later at Orange Europe. Then I decided to quit and move to the US to start an app publishing business. Since it wasn´t going as fast as I was hoping for, I started to think about other possibilities. I moved back to London and wanted to meet some people in the entrepreneurial space. I decided to attend some business meetups. The quality was very low, they were not very well curated, and so after 6 weeks, I started organizing my own events with only 18 people attending the first one. It felt kind of awkward as those were the same people I met during those 6 weeks before. There were no speakers, we just talked together and made introductions.

Afterwards, I redesigned the format based on the feedback from every single person, and another 6 weeks later, we had the next meetup with 170 people, and the third one with 230 attendees. Those were still free events, though. Around that time, I got a call from Derek, the founder of Startup Grind. He wanted to make a deal and see how we could work together. I liked their mission so we joined forces.

If you were to measure it, what would be the biggest outcome of Startup Grind events? Is it e.g. the number of startups that fundraised, people hired in the companies, or something else?

We measure our impact in three ways – connecting entrepreneurs with investors, mentors with mentees and helping entrepreneurs with advice. The numbers are not as important as the quality of the feedback we get. You were at the conference yourself; did you ask some people how they liked it? What did they say?

The feedback was pretty positive…

This is the crucial KPI for us, because people will tell their friends, and these friends will tell their friends. We always ask how people got to know about us and why they decided to come to the conference. The second most common reason is that their friends told them about us. This is extremely important because if we help someone, people won´t keep it to themselves. So the key indicator is not “how many” but “how intense”.

Let´s zoom out from Startup Grind and move to Slovakia, as you are Slovak born. What activities or initiatives are you currently a part of in Slovakia or in the region?

The easiest way for me to help is to invite inspiring entrepreneurs from Slovakia to our stage. So far, we´ve had three of them – Michal Stencl from Sygic, Mr. President Andrej Kiska and Juraj Vaculik from Aeromobil. This is the best way how I can support our country.

What would you say is the biggest difference between Slovak and British or London startup ecosystem?

Ambition and willingness to share. People in the UK don´t really worry about conquering the British, French or Irish market. They aim to be successful in the global market. From what I hear from Slovak startups, they want to be successful in Slovakia, maybe in German-speaking markets or Central Europe, which is counterproductive. Your ambition is hindered by the small size of your mindset, and if you don´t have the right mindset, you will never be extremely successful because you don´t think you can. If you build a company which should be moderately successful in Central and Eastern Europe, it´s not going to be something amazing. Accordingly, you will not hire world class people; you will hire somebody who is good enough for your vision.

People here are also not afraid to share. Long gone are the days when you had an idea and the first thing you did was that you went to the patent office and had it protected. Today, people understand that the more you share your thoughts with the right people, the better feedback you get and the faster you can improve your idea. In Slovakia, I still see this fear of opening up to others, because you are scared that somebody else will take your idea and run away with it. The chance for that is 0.03%.

On the other hand, what uniqueness or competitive advantage do you think our ecosystem possesses?

Overall, it is the talent. We seem to be very good at natural sciences, mathematics, physics; we have great engineers. In terms of segments and clusters, in Slovakia, there are three out of top ten largest antivirus companies in the region. So security is one big cluster followed by automotive. I worry a bit about automotive industry being stuck where it is now, and it is dangerous, because if VW or Peugeot decide to close the doors, we will have many unemployed people. We need to keep advancing, and the safest way is innovation. Thirdly, it is not very obvious yet, but I believe in smart energy and the potential it can have for Slovak companies, at least in the context of European Union.

As a vivid supporter of Slovak startup ecosystem and a strong networker, what Slovak company do you consider to be the next big thing?

I can´t pick one, there are so many companies coming out of Slovakia that have been working on their ideas for years. Flying car is not a sudden success, Stefan Klein had been trying to make it happen for 15 years before he met Juraj Vaculik. While the world can see it as a fast development, it took 20 years. I would also name companies like Pixel Federation or guys from GA Drilling.

At this point, one of the most unassuming and the most successful companies in Slovakia with a huge potential is Quality Unit which has launched Post Affiliate Pro, an affiliate program that ranks among the top in the world. Many companies also like and use the chat that Quality Unit had initially developed for themselves. Hence, they came up with a product called LiveAgent. Extremely smart guys, but not many people are aware of them. They are going to be big.

Even though we also have several potentially very successful companies which could reach the valuation of unicorns, it´s not as important as the fact that they have global potential and impact – from Pixel Federation, through Quality Unit to Fleming, or even Globsec.