Less than two weeks since Facebook announced Chatbot and live chat APIs at its F8 conference, Exponea is the first SaaS platform which opened Facebook Messenger Chatbot API integration to the public today. This gives all companies an opportunity to react much faster to chat requests and send order updates to customers without need of in-house IT development.

An annual  event to promote and honor the best startup projects of the year organized since 2011 will take place on December 2nd. But you already could have gotten the feeling of the whole atmosphere on the Startupawards.sk Kick-off Kosice with Filip Santa (AirHelp), Helo Macko (Visicom, SEAK Energetics) and Julius Bencko (Megaupload, Pixelhood) as speakers.

After hiring Alan Roach, the flying car company Aeromobil hires more top experts in the field. Senior aeronautical expert and consultant specialized in airworthiness, Hugues Le Cardinal joins the company as Head of Airworthiness, Simon Rooms became Head of Vehicle Engineering and design expert Mikael Olsson with the experiences from leading automotive and aviation companies strengthens CAD and design team. Along with that Ian Clark was promoted to Head of Vehicle Development.

Global Pioneers is the place where entrepreneurs find meaningful connections that lead to partnerships in a fast and sustainable way. It’s people helping people to support business growth. To get ready for the main Pioneers event in May, the Pioneers Bratislava was a great choice to spent the evening. The winner of the Pitching Competition was BatSuite project.

End of April and beginning of May belong to hackathons. First of the traditional StartupWeeknd events of 2016 was organised in Kosice with Ventured as the winner, followed by Carry Ninja and The Platna. At the same time DiploHack hosted by the Embassy of the Netherlands in Slovakia and Impact Hub Bratislava covered the topic of European open data. We are more than eager to see the next hackathon event on May 6th – Innovation Hack. Will you join us?

June 1st will be the date when JIC Starcube, an international startup accelerator, should launch the registration for the 2016 round. The 3 months programme for 10 startups and more than 80 mentors can boost your idea and take it to another level.

Impact Hub invited all the geeks and entuhsiasts of VR for the meetup of the fans of this evolving technology in Slovakia. It should be the first step towards creating a VR community. Regular VR dev meetings will follow. The next one? May 5th in Progressbar, the first Slovak hackerspace in Bratislava.

CEO of Hyperloop Transportation Technologies, Dirk Ahlborn, visited Bratislava only a month after his first visit. Along with many meetings he also managed to invite people for a get together where they could pose all the questions they have in regards to the potential Hyperloop project in Slovakia.

10 Reasons Why to Use the Decent Platform

DECENT is a new Slovak blockchain platform trying to disrupt publishing industry. Why you should consider using it?

“These days we are facing issues how censorship anywhere becomes censorship everywhere. Freedom of speech is under threat around the world. Government power and corporations are trying to set limits on what content is acceptable to publish and what is not. Online space development and the rise of decentralized technologies give us the opportunity to solve this problem and discover the essence of modern life for people everywhere to speak, write, and publish their ideas and thoughts freely.” Read the full article

HackTM, The Angel Capital EXPO Europe, Entrepreneurship Avenue and many others. What conferences and events in Europe shouldn´t you miss in May?

“We’ll start this with Pioneers Festival, the most influential event in the region for future technologies and entrepreneurship. It will take place on 24/25 May in Vienna, Austria at the Hofburg Imperial Palace. We are media partners of the conferences and you’ll be able to meet several 150sec team members there.” Read the full article

A year investing in European startups: Here’s what I’ve learned

After investing in India and US before, Vivek Goyal, an investment team member at Nokia Growth Partners, gained an experience with the European startup world. And here are his insights and experience.

“Last year, I moved to Europe to work in a growth stage venture capital fund. Having invested in tech companies in India and the US before, I expected the European tech ecosystem to be much smaller in comparison. However, the last year has been eye-opening. The European tech industry has more scale and intricacies than you might think.” Read the full article

European startup evnironment provides great potential and ideas but how is this reflected in the valuations? There were more deals closed but in the lower total value.

“In the first three months of 2016, there were 179 exits worth a total of €24 billion, of which 86 deals and €3.1 billion in value can be attributed to venture-backed companies. While the number of exits has increased significantly over the past few quarters, exit value took a hit in Q1. In terms of exit volume, we’ve tracked an 18% decrease compared to the previous quarter, and a 14% drop compared to the same period a year ago.” Read the full article

How easy access VC funding has softened the startup world

Michal Stencl, the founder and CEO of Sygic, is probably the first Slovak contributor on Crunch network of TechCrunch news website. In his first article he covers the topic of easy access to VC money and its impact on startups.

“The last decade has seen a period of extremely high venture capital activity, with a record peak of investment reached in 2015. This period of high VC investments has led to many amazing new products and companies, but it also has sparked a “Hollywood” era of high spending for early-stage companies.” Read the full article

What are the best projects and startups to keep an eye on during this year? EU-Startups picked up these six.

“Slovakia, the small country in the middle of Europe, might have been overlooked by investors in the tech industry in the past, but you will be surprised about the exciting startups that were born there.” Read the full article 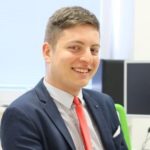 7 Steps to Build a Great Business with LinkedIn Co-founder