M.dot founders (acq. by GoDaddy) are about to disrupt the way distributed teams communicate 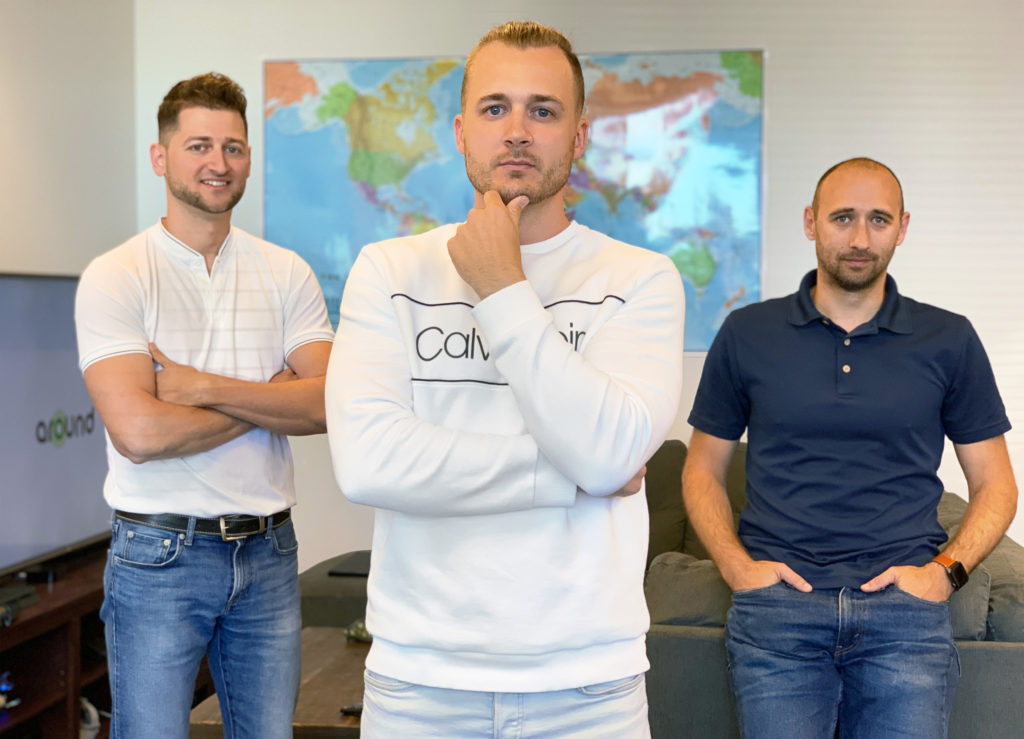 Different time zones, a flat screen between you and your colleagues, communication delays. If you work within a distributed team, you know these everyday struggles.

Recently, a trio of founders – former colleagues/classmates – got together and founded Around to help companies change the experience.

Dominik Balogh (CEO), Pavel Serbajlo (CTO), and Marian Zakutny (COO) know it’s not only about enhanced quality of the mic.

Ever heard of video communication psychology?

In 2009, Dominik and Pavel founded and developed M.dot.

It was a mobile-first solution for small businesses and micro-entrepreneurs to create and manage their mobile presence, from their mobile device.

GoDaddy, an internet domain registrar and web hosting company, acquired the startup beginning of 2013, and both of the founders gained new commitments in the acquiring company.

When their commitments matured, they both returned to Slovakia for an earned break.

“During this free time, we started to meet with my elementary school mate Marian. Even though Pavel and I tried to slow down, Marian was bursting with new ideas. He pushed us back to the startup life,” Dominik portrays the situation after leaving GoDaddy, smiling.

As a psychology enthusiast (and currently psychology student as well), Marian spotted the opportunities and came up with the idea for Around.

“In January 2018, we landed on the idea that the future of work is in distributed teams,” Marian uncovers the details. “The nature of modern work, especially among young people, is in remote work which can be performed from anywhere in the world.”

This kind of work requires a lot of video conference calls. And as we know, people are susceptible to everything that happens during such conversations.

Team members tend to hop on calls in crowded and noisy places – cafes, bistros, or shopping malls. And you know what follows:

– Pete, could you turn your mic off for a while? There’s some noise at your place.

– Pete, you forgot to turn your mic on.

The moment you need to raise your voice because of a mic distance, both you and the other side start to sense discomfort.

Another issue is that you are always worried whether you have your hair messed up, what does your skin look like, or if you have cleaned up space in the background.

“On top of that, the companies active in the industry such as Cisco WebEx, Zoom, Skype for Business, or Google Hangouts don’t get the crucial thing right: a clever distortion can bring better results than the most accurate reality,” says Dominik.

Nobody wants to have their face being looked at on a 70-inch HD display hanging from the wall. Around founders are confident the opposite is true: as humans, we want to cover defects and imperfections.

“The balance of psychology and technology is the right formula for the future of video conferences. Moreover, it must be balanced carefully and sensitively,” Marian explains. “Evolution of video communication psychology is currently down at the freezing point.”

The low-quality experience of communication is precisely the reason why any company’s culture degrades. “We are putting all the efforts in to make the experience truly comfortable,” he continues.

So in such a multi-billion industry, the (distributed) team of eleven developers and three founders has a good chance to succeed.

The solution Around aims to provide can’t be rolled out without a set of state-of-the-art audio and video tools combining traditional heuristic approaches with modern AI technology.

“The heart of our product lies in visual and sound real-time recognition,” Dominik reveals the curtain to the tech backstage.

Around brings a software product to the table. Its main value added?

Users won’t have to buy any hardware. “Using only existing portable devices, you’ll just launch Around software, and it will take care of all the audio/video,” Dominik compares their solution to the existing ones.

“Thanks to AI, we can capture so-called landmarks around the user’s lips in real time, thus knowing when the user is speaking based only on the visual data. That means a mic can turn on/off automatically when the user is (not) talking, without the need to have sufficient sound information at hand,” explains Dominik. “Even though the concept sounds simple, the execution will be a great challenge.”

The technology will also be able to assess the physical distance of a microphone from the voice source and dynamically switch to another one which might be closer to the voice source.

Besides, thanks to the Around’s video conference product, users will have a chance to extract unpleasant noises from the background such as sirens wailing or a dog barking.

Around has raised several million dollars from various top investors from California and Europe. Until today, the prototype has cost approx. 800K dollars.

The team has no plans for fundraising in the near future.

Tech and creative industries are the ones where Around will be fishing their clients. These businesses are known for a high rate of distributed teams.

“At the moment, we are presenting the prototype to potential customers, collecting feedback and scouting for market interest,” Dominik lists their priorities. “As the technology is so complex, we want to make sure the technology works reliably once we deploy it.”