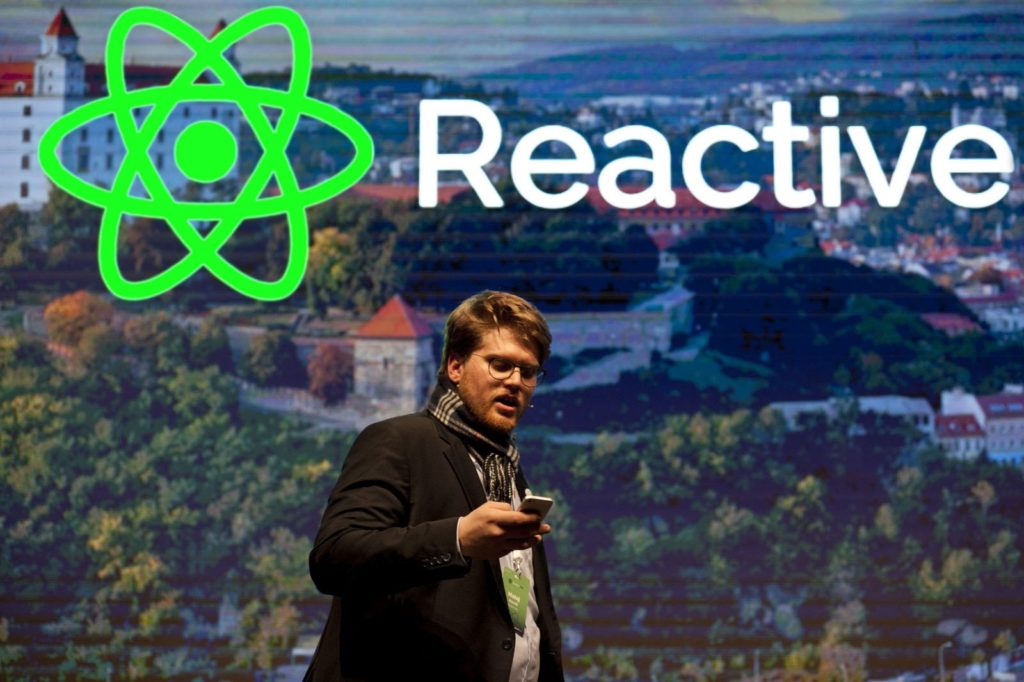 If you are in the field of front-end development, you have definitely heard about ReactJS. There’s a ton of buzz going on and a bunch of conferences around the world. I have decided to check out “the biggest web and mobile app development conference in Europe” as the organizers of ReactiveConf in Bratislava put it. Was it a conference worth attending? Let’s have a look.

Right after entering the Old Town Hall in Bratislava, I got to the registration desk, and the whole process ran fast: I received a badge not only with my name but, more importantly, the WIFI network name and its password. More surprisingly, we received a 10 EUR UBER voucher for new users and a 20% discount voucher for existing ones. This is how you should treat your attendees!

The conference was officially opened by Matej Ftacnik, the co-founder of VacuumLabs, which is behind the conference. Mr. President of the Slovak Republic, Andrej Kiska, known to be a technology innovations fan, joined us via a recorded video. I guess you don’t usually see this on a techie conference.

Right at the start, a Google developer from Slovakia working on both Angular 1 and Angular 2 took over the stage. Igor Minar talked about the challenges and technologies that have influenced the 1st version of Angular such as jQuery, Google Web Toolkit or Adobe Flex. Quite a surprise for me was listening to Igor pointing out that they had done a few mistakes when designing Angular 1, which they tried to fix in the second version of this widely used framework. Most of us look up to companies like Google, Facebook or Apple and their skilled developers, but it’s nice to hear that they also make mistakes. I mean it the good way, of course.

Sean Grove speech was about Reason(ML), which is another technology by Facebook claiming to be “a new developer experience for rapidly building fast, safe systems”. If Ocaml, ELM or functional programming is your thing, you should definitely check out these technologies. One thing took my breath during his speech. If I understood correctly, the Reason compiler not only gives you helpful hints on your errors (like the ELM’s one), but it can also literally rewrite some chunks of your code right when you hit save on your source code. This is kind of scary.

Guillermo Rauch and the future of ReactJS

When Guillermo Rauch started the speech called “What’s Next? Exploring the future of ReactJS”, I was expecting him to cover the future of ReactJS technology. Apparently, he caught me unprepared and routed my attention to pitch two technologies: Next(JS) and Now. Next(JS) is “a small framework for server-rendered universal JavaScript webapps”. Not something that would give me goosebumps, but feel free to check it out. On the other hand, Now got me really excited. It allows you to take your JavaScript (Node.js) or Docker powered websites, applications and services to the cloud with ease, speed and reliability. How many times did you want to quickly share your simple app with a fellow developer over the internet? Now allows you to deploy “any directory which contains package.json or Dockerfile” in the cloud in a matter of seconds and leaves you with a URL to share.

The highlight of the first day, Michael Glukhovsky, stepped on the stage and used every minute to convince you that RethinkDB is definitely a database you want to try. It’s being used by hundreds of companies out there, including NASA which monitors realtime data from cosmonauts’ suits. He introduced his new project – Horizon, which aims to be a realtime JavaScript backend. It helps you to setup your application boilerplate quickly and then lets you switch or reconfigure individual modules as your project grows. Michael also took some time to explain what’s going on with RethinkDB as the mother company stopped financing this project for some reason. Now he and the team are analyzing the right path for the company’s future. If you want to help or contribute to RethinkDB project, definitely ping Mike on Twitter @mglukhovsky.

The first day main speakers’ block was closed by energizing Richard Feldman from NoRedInk. Richard described how they were able to get Elm and React into quite a big existing app in production. The idea was to implement something small in Elm (or React) and then ship it all the way to production. If you prove your concept wrong, you can quickly revert to the previous version, and nothing really happens. But if you prove your concept right, you can re-implement more code and refactor your whole app into the desired technology over time. In NoRedInk, they were able to transform their whole codebase from no-React to full-React in 1.5 to 2 years. And they are on the track with Elm, too, as Richard is known to be a passionate evangelist of Elm.

The official part of the day was closed by so-called “lightning” speeches: five minute speeches from different developers. What got my attention was a rich-text editor developed by Facebook called DraftJS, published earlier this year. Basically, every time you update your status or write a comment, you use this library which supports all kinds of rich-text plugins like mentions, hashtags, images, and others.

After a great afterparty on Thursday, people were arriving to the venue quite slowly. Scheduled start at 9am was postponed for a few minutes. At 9:30am, the place was crowded again.

The speeches started with Max Stoiber, who came all the way from Australia to talk about styled-components and enforcing best practices:
a) Build small stateless focused components (Button, Link, …)
b) Build these completely independent from your business login (controllers)
So split your smart and dumb (stateful and stateless) components where stateless focused components should take care of styling and stateful should care about data handling and business logic. He has built a library called Styled-components which solves different problems when building and styling UI components — global CSS names, dead code elimination, etc.

Mark’s topic, The Universality of Static Sites, covered challenges when doing both client- and server-side rendering. In his company, they had an outage of React servers which caused a white screen of death —  no content was rendered on server- or client-side. So they came with an interesting idea to render site as static HTML in the buildtime as fallback. Mark has built a static-site-generator-webpack-plugin for this purpose. To optimize your content delivery, you can take this path:
a) server-side rendering,
b) client-side rendering,
c) static pre-rendered HTML as fallback.

Building better mobile apps with GraphQL by Martijn was engaging especially thanks to the recent buzz around GraphQL. He listed a few important reasons why try GraphQL instead RestAPIs:
a) RestAPI usually returns a lot of data, which you don’t really need.
b) You have to do multiple RestAPI calls in order to get all the data you really need.
c) Performance issues come along with a) and b).
d) GraphQL is built for product (UI) developers.

The theme of famous David Nolen was not announced until the very end, so nobody knew what to expect. In a mysteriously named talk – Through the Looking Glass – David shared his experience with using immutable data to build your app. David became known thanks to an article he wrote about three years ago comparing the usage of React with mutable and immutable structures. He ended up with almost three times faster React when using immutable structures, and the blogpost set things moving in the React and Javascript community. He also mentioned ClosureScript, interactive programming, dead-code elimination and also cross-module code-spliting (using Google Closure). Among important libraries to wathc, David pointed out GraphQL, Falcor (from Netflix) and Datomic.

Are you coming the next year?

To sum up, three days of workshops and great speeches from high-profile speakers made the ReactiveConf definitely worth visiting this year. Considering it was only the second year this conference was organized, I must also point out the almost-perfect schedule, tasty catering and great after-parties. ReactiveConf is definitely a conference to attend again next year.