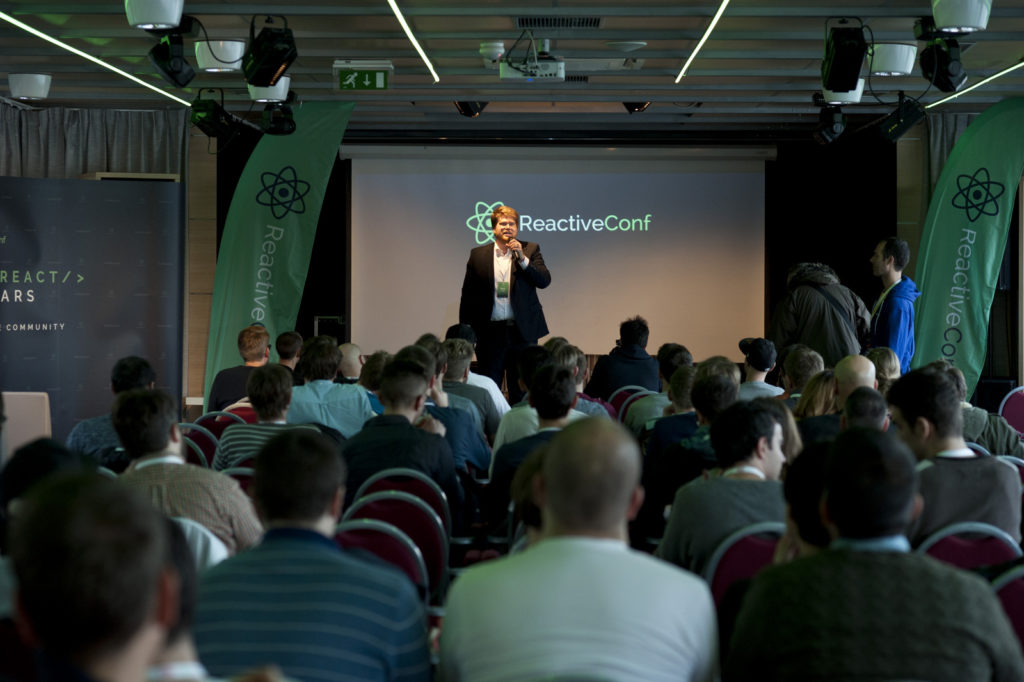 Brent Vatne, Sean Grove, Richard Feldman, Igor Minar, and Michael Glukhovsky, the contemporary tech rockstars, got together on Thursday during the second day of ReactiveConf to discuss the future of the app development. Furthermore, up-and-coming speakers got a unique opportunity to propose their ideas during Lightning Talks.

During the one-hour press conference held in Bratislava’s creative makerspace lab, the journalists asked many questions on what is next in the tech world.

Richard Feldman, the Elm expert from NoRedInk, started with the biggest challenge coders and developers are currently facing. “As much as we love incorporating new functions and new things into tech products and services, the evolution of coding languages is much faster than the capability to integrate them successfully,” he said.

Michael Glukhovsky, the co-founder of RethinkDB, added that the development of JavaScript, for example, moves too quickly and that it places a lot of pressure on the back end. “It takes a long time to adapt old ways to the new ones,” he admitted.

Google’s Igor Minar, one of the key developers of Angular, claimed that this is not just a matter of an application’s inner structure, but that you also have to convince the end users. “Once people get used to something, it’s hard to change their behavior with new approaches.”

Brent Vatne from Exponent said that the web is getting better all the time, but he lamented that the JavaScript performance is sometimes a problem. Igor Minar added, however, that the internet is the only platform that can cross operating systems and digital environments.

Naturally, this led to the question of opening platforms such as iOS, Android, and others to make them fully cooperative. “Of course, you don’t want to rebuild apps all the time,” said Minar, but he wasn’t optimistic about the whole issue: “I don’t think Apple or others will want to open their platforms.”

Although this has caused headaches to developers ever since the first coding languages were created, according to Sean Grove, the founder of Bushido, the user must be developers’ priority. “Any app must be designed in order to make sense on any device and any platform. The main thing is to understand the user.”

ReactiveConf found the next tech superstars

The panel of ten super short talks took place on the Thursday evening, the second day of this year’s ReactiveConf. The ten participants were chosen by the community in an online voting that took place a few weeks before the conference began.

All the talks had to fit the five-minute limit, so the speakers had to propose interesting and new ideas in an engaging and exciting manner.

Peter Peresini talked about reducing the Redux boilerplate and received a huge round of applause for his innovative approach. Ondrej Bartas brought fresh solutions on dealing with a lot of components in React, and Nik Graf presented the possibilities the rich text editing brings to DraftJS plugins.

Adam Terlson was one of the new-born stars of the evening with his interpretation of an app as a function. Aleksey Kulikov’s talk was a huge success on Twitter where many people pointed out that he was the only one to address the CSS language during the day.

Even though ReactiveConf ends on Friday, October 28th, works on the 2017 edition are already under way, and Lightning Talks are going to be a fundamental part of the event again next year. More information on the 2017 Lightning Talks will be released in late spring.